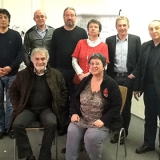 LLWINGS aims at promoting a new vision of school as the bridge to lifelong learning and active citizenship, through a focus on learning-to-learn competences and joy to learn as the very WINGS for lifelong learning.

LLWings in particular aims to support teachers as the leading actors of bottom-up school innovation in translating the "learning to Learn" goal into practice and daily enhance joy and motivation to learn among their students. This was done by identifying and promoting those teacher competences which are key to transform school in a learning environment built around the learner and open to the territory and its non-formal and informal learning opportunities, so to make the learning process meaningful and relevant, and its sense "owned" by the student.

Big Foot is set out to tackle key issues at European level: marginalization of the rural mountain areas and their ageing population - by focusing on the valorization and maintenance of the elderly population, traditional knowledge and specific local culture. The Big Foot approach is implemented in three rural municipalities: Berkovitsa, Bulgaria; Trikala, Greece and Gubbio, Italy.

e-epsol | Education and Employment Pathways for Speakers of Other Languages

This project aimed at organisations from the Employability sector and the Adult Education/Training sectors. The project provided information on how to engage with and support Ethnic Minority groups and Migrants into employment through job shadowing, work placement, employer engagement and vocational language training and employability skills development. The results included a Research Report from each partner country detailing target groups and employment sectors; examples of the transferred materials from the project (Skills Audit Toolkit, Vocational Language Course, Study Skills Course, Empowerment Course and Equipped For the Future Course);feedback from beneficiaries and trainers. The products from the project will be integrated into core activities of partner organisations.

RISE aims to remove the gaps in key competencies that create barriers to employment for refugees, by developing the focussed curriculum and accompanying learning materials, including interactive desktop and mobile games based learning resources, which are engaging and accessible to the target groups.

The RISE partner organisations worked with refugees and employers to identify the gaps in key skills that create barriers to employment for refugees. Workshops were held with groups of refugees from the three partner countries, to establish their support needs. There then followed a process of co-design with our end users, which confirmed the RISE project end products.

This project aims at developing an awareness raising campaign for the validation of learning outcomes of non-formal and informal learning as a tool to further improve adults’ career perspectives and stimulate their further education and training.

City of Bologna celebrates 1 year of experimenting with urban commons

Bologna's Mayor Merola about to give civic collaborators keys to the city at the recent Civic Collaboration Fest:

It all began with park benches. In 2011, a group of women in Bologna, Italy wanted to donate benches to their neighborhood park, Piazza Carducci. There was nowhere to sit in their park. So they called the city government to get permission to put in benches. They called one department, which referred them to another, which sent them on again. No one in the city could help them. This dilemma highlighted an important civic lacuna -- there simply was no way for citizens to contribute improvements to the city. In fact, it was illegal.

Fast forward to May 16, 2015. The mayor, city councilors, community leaders, journalists, and hundreds of others gathered at the awe-inspiring MAST Gallery for the opening ceremony of Bologna’s Civic Collaboration Fest celebrating the one year anniversary of the Bologna Regulation for the Care and Regeneration of the Urban Commons, a history-making institutional innovation that enables Bologna to operate as a collaborative commons. Now Bologna’s citizens have a legal way to contribute to their city. Since the regulation passed one year ago, more than 100 citizen-led projects have signed “collaboration pacts” with the city under the regulation to contribute urban improvements with 100 more in the pipeline.

In 2013 around 34 million persons born in a third country (TCNs) were currently living in the European Union (EU), representing 7% of its total population. Integrating immigrants, i.e. allowing them to participate in the host society at the same level as natives, is an active, not a passive, process that involves two parties, the host society and the immigrants, working together to build a cohesive society.

A Call For Investment In Community Learning

Susannah Chambers, NIACE in her latest vlog is discussing the positive contributions and valuable skills Community Learning can bring to learners and society. Underpinning research evidence is presented to support the call for there to be national investment in a radical new vision for Community Learning.

One of Cedefop’s main priorities is to support EU Member States and social partners in further developing and improving vocational education and training (VET) and lifelong learning policies and practices. To be able to do this systematically, Cedefop has launched a series of policy learning forums on a range of subjects.

The aim is to establish a continuous process of sharing and learning where initial policy learning events are followed up through continued cooperation. Experts from 24 countries gathered in Thessaloniki on 24-25 September for the first forum, which addressed the way the learning outcomes principle and approach is used to define and describe VET qualifications across Europe.